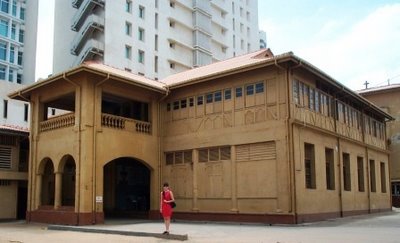 Mr. Keble, was an eminent British scholar, author and educationalist. He was also the first headmaster of this school. He was an alumnus of Keble College Oxford, which is named after his maternal granduncle John Keble. He was the author of two books ‘Ceylon Beaten Track’ and the novel on Sigiriya. He arrived in Ceylon (The name for Sri Lanka during the British colonial governance) in 1928 to join the staff of S. Thomas’ College, Mt. Lavinia, during the tenure of Warden Kenneth McPherson.

The school was the first Preparatory School to be established in Sri Lanka based on the English Primary School model. more than Sixty years ago the birth of ‘Prep’ took place when 10 helpers from S. Thomas’ College arriving to scrub out an empty Fortrose bungalow; and to order ninety-eight desks and chairs, eighteen beds and mattresses and the same number of cups, plates, knives, forks, spoons glasses and bowls; two long teak wood tables and four long benches; pots and pans: office equipment and cupboards: cricket bats and footballs: and all the paraphernalia of a school.

For over seventy years S. Thomas’ Preparatory School, Kollupitiya has sought to uphold the cause of true education, and done all it can to make a worthy contribution to enrich the life of our land. The founder’s memory is enshrined in a lasting manner in the standing of the school, it’s influence for good, its moral tone, its unwritten code of conduct and its scholarship.