“Two hundred years after it was published, the poem can still reach new audiences and inspire them.”

William Wordsworth wrote Daffodils on a stormy day in spring, while walking along with his sister Dorothy near Ullswater Lake, in England. He imagined that the daffodils were dancing and invoking him to join and enjoy the breezy nature of the fields. Dorothy Wordsworth, the younger sister of William Wordsworth, found the poem so interesting that she took ‘Daffodils’ as the subject for her journal. The poem contains six lines in four stanzas, as an appreciation of daffodils.

I wandered lonely as a cloud
That floats on high o’er vales and hills,
When all at once I saw a crowd,
A host, of golden daffodils;
Beside the lake, beneath the trees,
Fluttering and dancing in the breeze.

Continuous as the stars that shine
And twinkle on the milky way,
They stretched in never-ending line
Along the margin of a bay:
Ten thousand saw I at a glance,
Tossing their heads in sprightly dance.

The waves beside them danced; but they
Out-did the sparkling waves in glee:
A poet could not but be gay,
In such a jocund company:
I gazed – and gazed – but little thought
What wealth the show to me had brought:

For oft, when on my couch I lie
In vacant or in pensive mood,
They flash upon that inward eye
Which is the bliss of solitude;
And then my heart with pleasure fills,
And dances with the daffodils.

I have often shown pictures of daffodils to participants at various workshops or seminars and asked them what they thought of the daffodils, about the entire scene presented by Wordsworth way back in 1807. I have asked many a time whether anyone wondered why the daffodils were dancing. Di d they have a right to dance, were they happy ?

Compared with the daffodils , I wonder whether we could say we are happy as humans. We come across many who grumble, mumble and fumble because we have strayed away so much from nature in our thinking, in our food, in our relationships that we could no longer dance like those daffodils. What a pity. It’s time we became more natural, lived closer to nature to regain our health in both mind & body so that we will be able to truly dance  with the daffodils.

Memories we deposit today will give us the pains of the pleasure of tomorrow, so be careful what deposit today, because in reality you are creating the future you are going to experience….

Why, because the same lovely feeling he had when he saw the flowers in 1807 would instantly return to him. We all know that. The bad memories bring unhappiness and the pleasant ones, happiness and bliss…..

Please take time away from the hustle and bustle of life to walk under the starry skies, feel the wind on your cheek, be grateful for what you have in life and live life to the fullest.  It requires more of your heart than your head…… 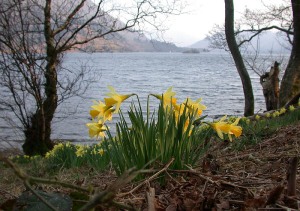 When William and Dorothy Wordsworth visited Glencoyne Park on 15 April 1802, this visit gave Wordsworth the inspiration to write his most famous poem, ‘Daffodils’.