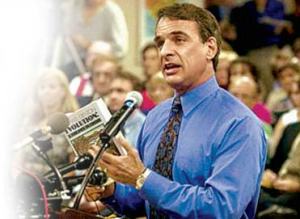 The task of scientific popularization is a difficult one. Too many authors think that it is to be accomplished by frequent resort to explanatorily vacuous and obfuscating metaphors which leave the reader puzzling over what exactly a particular theory asserts. One of the great merits of Alexander Vilenkin's book is that he shuns this route in favor of straightforward, simple explanations of key terms and ideas. Couple that with a writing style that is marvelously lucid, and you have one of the best popularizations of current physical cosmology available from one of its foremost practitioners.

Vilenkin vigorously champions the idea that we live in a multiverse, that is to say, the causally connected universe is but one domain in a much vaster cosmos which comprises an infinite number of such domains. Moreover, each causally connected domain is subdivided into an infinite number of subdomains, each constituting an observable universe bounded by an event horizon. As if that were not enough, Vilenkin also endorses Everett's Many Worlds Interpretation of quantum physics, so that even the infinite multiverse is but one of an indefinitely large class of distinct multiverses. The result is a breath-taking vision of physical reality.